I’m not very keen on roses…

… but I made an exception for these, fresh from the cottage garden of my godmother’s neighbour and brought round in a jam jar as a gift.

The photograph was taken with the G800 in sunlight so bright I could barely see the image on the screen.  All I have done is take it off the phone and reduce it to 40% of its original size.

(Photographed with the Samsung G800, with the contrast turned up a bit with PhotoImpact).

I don’t know why I found it so satisfying when the young man put his newly polished shoes on the windowsill in front of the orchids.  I watched him clean them with spit and with polish.  A fascinating process, and you can just see how shiny it got them.  It photographed ok-ish.   The camera is more sensitive to light and dark than the human eye, so the curtains were much lighter and brighter than they show in the photograph.

Some time ago there was a fashion, or a flashion perhaps, for flash mobbing.  Wikipedia’s current definition says: “A  is a large group of people who assemble suddenly in a public place, perform an unusual action for a brief period of time, then quickly disperse.”

The other day I took a trip from Settle to Carlisle, and when we got there, we found what I can only describe as a flash municipal park.

The plants were orderly and very very plentiful and

so healthy and cheap that the one I was with had to remind me just how difficult it would be to wrestle them on and off the train.  Otherwise I’d have flashed my cash and bought half the pavement.

Posted in art, the one who

I’ve mentioned already that I work near an art gallery. I noticed a piece of opportunistic recycling as I walked into town today.

“creates new relationships, experimenting with unexpected combinations of materials creating objects and environments, which encourage us to see the everyday world with fresh eyes”

Though I do wonder if a graffitied garage door is quite what she intended. It pleased me though.

The earlier mornings and later afternoons are a daily delight, and when you add sunshine it’s bliss. 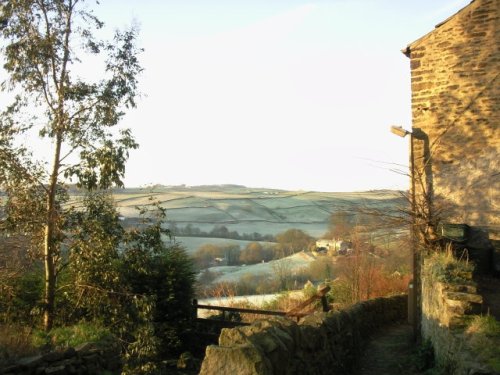 And here is the mid-section of the photograph at full resolution, but cropped.

Not in Cuneiform any More

I’d forgotten that I’d photographed a whiteboard at work today until I downloaded my other photos off my phone this evening.

Since this is a record of what I see each day as much as it’s anything, I put it up here as today’s offering.

It’s not inherently interesting, but in the context of this blog I take comfort that so much early cuneiform is the deadly dull record-keeping of Assyrian and Babylonian civil servants.

Incidentally, the optical zoom on the G800 was useful for this because it allowed me to stand at the other end of the table and photograph the board straight on and still get the image to fill the frame.

Tulips up close and personal

The frustrating thing is that the Sony Ericsson has the better software controls (and I’ll miss them) but the Samsung is the better camera. These two photos were taken with everything except the flash and the focus turned to “auto”.

It’s not particularly bright in here (it’s my kitchen, it’s 7.00pm, it’s February) but both phones did pretty well. 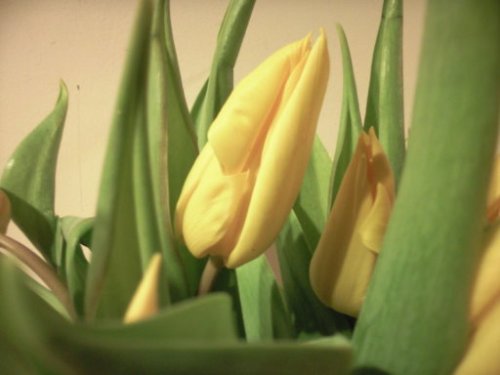 Interestingly, the Sony Ericsson (below) is closer to what I see, but the Samsung (above) is the more pleasing image.

Talking of not very bright – why did I commit to a photo every day for four weeks when it’s still dark in the evenings? Oh well.

When the one I spend my weekends with and I saw the abandoned ferry, it was surrounded by water. I wanted to see it beached on the sand, so I went back at low(ish) tide today and took some more photographs, and I took the opportunity to compare the Samsung G800 with the Sony Ericsson K800i. I’m also putting up a Picassa album, it is past time I did so.

The image below was taken with the Sony Ericsson, and I’ve reduced it to 20% of it’s original size. It seems rather hazy, though in fairness the lens needed cleaning. 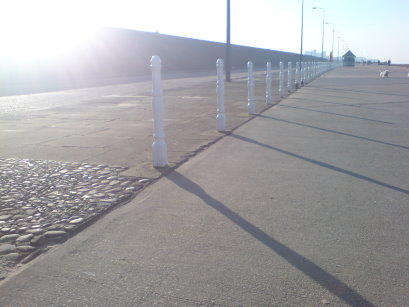 The image below is the same shot with the Samsung. I’d run out of memory on the phone and the original was half the maximum size the camera will handle. It’s been reduced to about 60% of its original size to match the other image. 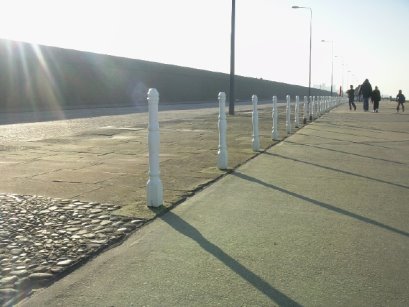 Despite that, it does rather make the point though. I’ll do some more of these with clean lenses.

I’m usually very careful not to photograph other people’s children, but I could not resist this one which is 25% of the size of the original:

Back to the ferry: I thought the Sony Ericsson was giving me brighter colours at the time, but now I wonder if LCD screen on the Ericsson makes the colours appear brighter. I can adjust both LCD screens on both phones, so it’s pretty irrelevant really. 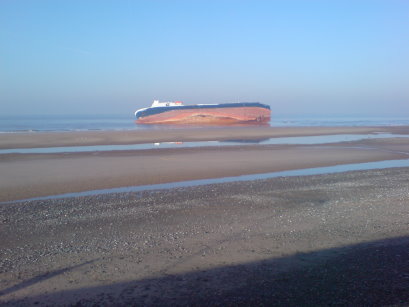 And now the Samsung – I was wingeing yesterday that every single thing is in focus in Samsung-land but – hey – it can look really good like that:

The Samsung places brackets around the central section of the image when you look through the view finder which is distracting, and this is one of the few images I took this morning which doesn’t have the subject plonked in the middle of the picture.

I messed around with the zoom feature a bit as well today, but there are only so many photographs of the ferry that you or I can look at, gentle viewer, without our exasperation showing, so I’ll put up photos which demonstrate that feature another day.

The Ladybird Book of the Sea Shore

We were going to Cleveleys for another reason entirely, and drove past the grounded ferry. For some reason a fire engine decided to drive along the promenade just as we arrived:

The ferry was the perfect opportunity to try out the optical and digital zoom on the camera:

The photo above is “au naturel” and the photo below has the 3x optical zoom:

This is the first time I’ve had a camera with a zoom lens, and I rather like it.  There’s also a digital zoom which I’ll play with another day.

There were buses and vans there too, for some reason to do with tram repairs:

Unfortunately I couldn’t get the true ladybird shot, of the ferry, the fire engine, the bus, the van, a tram, a car and a plane.

There was one image which pleased me as an image rather than a camera test:

As before, these are as they came off the camera, but reduced to 20% of their original size.