Not by itself, no.  But Web 2.0, in particular the data-mashups on the comparison websites, the blogosphere and the consumer discussion boards, made the banking crisis broader and deeper than it would otherwise have been.  Or so I have just concluded, though I’ve not heard anyone else saying this.

Every now and again you come across a piece of research so startling that you have to get up at 6 in the morning and blog about it.  OK, I appreciate it is slightly odd to be reading a Deutsche Bank Research paper in bed at 05:45 am but I find I study best in the mornings, ok?

So here it is.

In 3 years the percentage of people who shopped around for financial products went up from 15% to 55%. 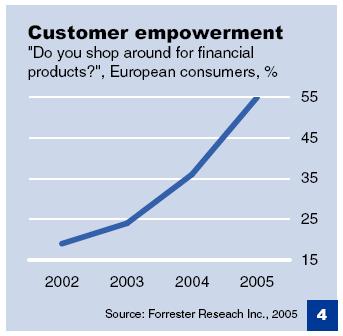 This is good, yes?  We get better value for money and it’s an end to the miss-selling scandals of the 1980s and 1990s.  The consumer wins and Martin Lewis rules, right?

Ri-ight.  And I certainly do use comparison web-sites to shop around for financial services and utilities. But…

But presumably if you flip this around it means that during the middle three years of this decade the banks found they could no longer rely on inertia to sell 85% of their products for them.  And that, my chickadees, is an astonishing upheaval.  And I believe that the graph above  goes a long way towards telling us why the credit crunch (the consequences of which will outlast the lifespan of my pension) was so deep and so disturbingly global.

You see, this swing in consumer habits is astonishing. It is a tectonic shift in the financial services industry in its own right.  It’s huge.  And it tells us a lot about the pressures that the retail banks were under during the period leading up to the crisis last  year to create comparison-site winners.  No bloody wonder that when Northern Rock created that pernicous 125% mortgage the Coventry and HBOS followed suit.  They had to, or lose business.  And no wonder that a niche and specialist product – the self certified mortgage – ended up comprising almost half the mortgage market. The market over-heated when information became friction-free, the regulators didn’t stop the bankers and the bankers couldn’t stop themselves.

I won’t say that Martin Lewis made them do it, but I will say that bad business drives out good.  Putting it simply, the banks cut margins to the point where they couldn’t afford the products they sold us.   The chart above just puts numbers on the pressures they were under: in 2002 a bank or insurance company could, it seems, rely on 85% of its customers not to shop around for the best deal.  So it was relatively easy for it to sell us sustainable products that were not artificially competitive. And, yes, it could also miss-sell us inappropriate products; the force has a light side and a dark side after all.  But in three short years, by 2005, it seems that only 45% of it’s customers would buy the first product they’re offered.  As I said, I would love to know what that figure is now.

For a while, this unsustainable business put artificial pressure on the sustainable businesses. Look at the period from 2003 to 2006 in the chart below.  HBOS’s lending products were super-competitive, it was increasingly successful, and it left Lloyds TSB standing. But as we can see, early in 2007 the chickens tumbled home to roost. 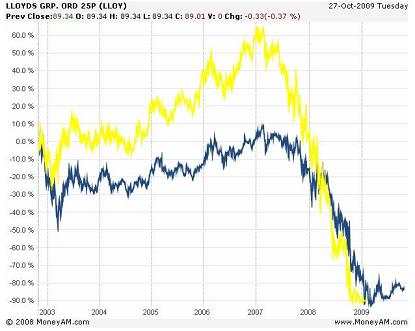 (Unfortunately the Telegraph’s excellent free charting service does not let me plot a specific stock against its sector but HBOS tracked the sector and Lloyds didn’t).

And Iceland? Could Iceland’s banks have grown their foreign business in the way that’s charted below without individuals and organisations overseas shopping around on-line? 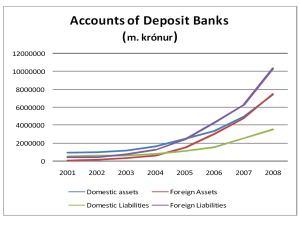 I don’t know the answer to that question. It could be co-incidence; I have to admit that the paper I got the chart from argues against interventionism, but I needed to reference Iceland again to justify a cheap headline.  However, the chart above indicates that Iceland’s foreign assets and liabilities appear to have gone up six- or eight-fold between 2002 and 2005, and it seems implausible to me that Iceland could have got so much consumer business in that time without consumers responding to online reviews and advertising.

So – is this yet another case of my only love springing from my only hate?

Web 2.0 is immensely liberating.  It is amazing that we have so much access to so much competitive information.  It is great for us as individuals that we can protect ourselves from being ripped off by banks and utilities.  But there’s no two ways about it – Web 2.0 changed consumers’ financial services buying patterns in a way that amplified the competitive pressures on the retail banks, and that is the untold story of the credit crunch.

As my grandmother used to warn me: too much ice-cream is bad for you.

Stefan Heng, Thomas Meyer, Antje Stobbe (2007)
Implications of Web 2.0 for Financial Institutions: Be a Driver, Not a Passenger