I’m distracted this week by the campaign to #saveH2G2.

What is H2G2, and why should you care?

H2G2 is one of the community sites shivering under the BBC’s axe. It was bought by the BBC on the 25th January 2001 and a decade later less one day the BBC announced it will be “disposed of”. “Disposed of”, note, not “closed” because there is something here of great vitality.

H2G2 is an open access writing site, where you’ll get thoughtful and constructive feedback on what you write through a system of writing workshops and peer review and where you can make friends (and enemies) that you’ll value for life. 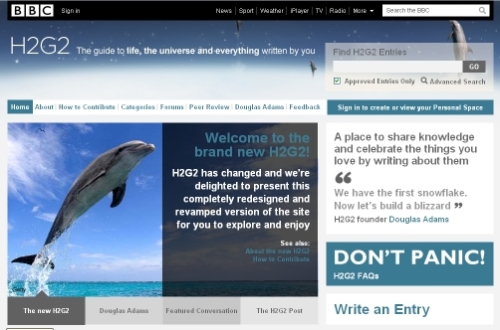 But whenever I try to say more I just end up saying what it isn’t:

And after –  or because of – it’s indescribable past it now faces an uncertain future.  Nick Reynolds (Social Media Executive, BBC Online) and Jim Lynn (who developed the original platform) both express cryptic goodwill and commitment to the community.  But it’s hard to see who’d want to buy the site.

The future then and now

One of the great wistfulnesses about h2g2 is the difference between what it could have been and what it was.  Douglas Adams was an astonishing visionary about all things online…

49 minutes of uncanny prescience.
Where we are now predicted way back then
by Douglas Adams in 1990.

… but  the BBC never really took first mover’s advantage in any of the then-cool things that h2g2 was first to have.  And now the BBC are disposing of what has become a site that even those of us who love it have to admit is quaint.

And how have the h2g2 community responded?

By and large, pretty well.  As Nick Reynolds said:

H2G2 is the best behaved and most civilised community I’ve ever encountered. The way that you have reacted to the news is a great credit to you.

Members of the community have gathered in a Google Group called the h2g2 Continuity Consortium (h2g2c2 – geddit) and are trying to put the show on right here in the barn… er… server farm.

Some of the comment is skeptical,  but slightly to my surprise, I think we’ll succeed, partly because we are not trying to buy the site off the BBC. We want to ensure that the best possible group runs the site, but are rather reluctantly aware that group might end up being us.

We will succeed in the short term because the BBC is not pulling the plug immediately, because we’ve been overwhelmed by offers of server space, by advice from people who’ve done the same thing in other online communities, and by practical support from within the community.

And I think we will succeed in the long term because we are so old.  We know each other.   We’ve fought, flirted, argued and made up across timezones and forums for a long time.  We’ve danced at each others’ weddings, stood godparents to each others children, and grown from being school-children to adults, collecting relevant (and gloriously irrelevant) skills, experiences and qualifications in the process.

We know how the internet works, how online communities and social media and web servers and all the things that Douglas Adams predicted but the rest of us took ten years to find out.

And best of all, it turns out that we are not just a bunch of quirky names and flirty posts, but also a bunch of coders and project managers, change programme leaders, doctors and people claiming disability benefit or who are just plain on the dole.  We have skilz and we have time.  (A lot of the former and a bit of the latter).

In management speak, we’ve Stormed (ye gods how we’ve stormed) Formed and Normed (and abNormed, but that’s a different story).

Now we are ready to Perform.

I can tell when one of them has scented me out and is tracking me. We are a prey species, however much men like to think of themselves as mighty hunters. Douglas Adams knew it when he defined “ely” (which is pronounced “eelee”) as “the first, tiniest inkling you get that something, somewhere has gone terribly wrong.” We can tell.

There’s a word he didn’t define though, for the first, tiniest inkling you get that a migraine has found you. That it has sniffed you out from the whole of the rest of migraine-suffering humanity. That it is hunting you down, waiting to stroke you and suffocate you. Waiting to turn you into pain, hallucinations and vomiting.

Then, like a victorian parent, the migraine will sit beside you on the bed smoothing your forehead and telling you kindly that it is for your own good. It is because you have been doing to much, driving too far, working too late. If you won’t take a rest, it says with benign sanctimony, then I will make you take a rest. You know you need a rest. You know you need me.

I bargain with my migraines. “Look”, I say. “I’ll take this little tablet today, but tomorrow I’ll spend the whole day in bed. I know you are right,” I say slyly, “I do need to rest. But I am busy today. Spare me today. Please”.