In the Pardoner’s footprints

Work has just arranged for us employees to offset our carbon footprints by making a donation to an eco-charity through our pay. So that’s ok then.

There’s a pause while Aphra whomps up the central heating, opens all the windows, turns on all the lights and drives into town to book an entirely gratuitous holiday abroad. 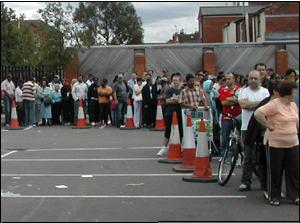 I have, of course, bought my freedom from green-guilt. When the crops fail and the seas boil and we all die nasty, violent, hungry deaths fighting over the last lollo rosso in Sainsburys, it won’t be MY fault, ok? Think I’m exaggerating? The picture on the right shows people queueing outside Asda in Tewkesbury for their six allocated bottles of water in Gloucestershire this summer.

Amartya Sen postulated that there has never been a famine in a democracy. The benefit of democracy is not about choosing which bunch of power-crazed loons will ruin our lives and the planet next, it’s about holding the bastards accountable. That’s the reason it’s important to vote. It’s cheap of me to compare the 2007 floods in the UK with Katrina, and cynical of me to suggest that if terrorists had bombed the levees then the good ole southern boys of the Bush government would have done something about New Orleans, but no matter how generous I try to be, I cannot help thinking that the US Government simply didn’t care because the people were black and few of them were voters. This is all at something of tangent to what I am saying here, but Katrina in one way and the 2007 UK floods in another are still rich with examples of the double-think involved in climate-change denial.

And here’s a third. The democrats are guilty too. It’s estimated that the carbon footprint for Live8 was 31,500 tonnes, with Madonna’s annual carbon footprint estimated at 1017 tonnes. But of course, it wasn’t about the fame and the exposure, it was about saving the planet, right?

One of the drivers for protestantism was Luther’s disgust with the way that the Catholic Church sold “indulgences” and “pardons” for cash, making no attempt to actually change people’s behaviour. Even in those days virtue was unprofitable but guilt was gilt. But of course, only virtue is virtue, and we are kidding ourselves if we think that off-sets and rock concerts will save the planet.

And so, even though it makes me feel dirty, even though it feels like blood money, even though the double-think hurts my brain, I’ve duly calculated my carbon footprint, worked out the monthly sum, and signed the standing order that means that none of it’s my fault, ok.

(For what it’s worth, my direct footprint is somewhere between 6 and 8 tonnes depending on which calculator I use, though there’s a secondary footprint for the goods I buy and the services I use which I haven’t even tried to work out).

4 responses to “In the Pardoner’s footprints”