Actually of course it isn’t a bookcase at all, it’s a bookshelf. However I am inordinately pleased with it. For over a year it was entirely Mythical while no-one else thought it could, would or ever should exist. Since it is now manifest, it seems only right that it should be promoted to Legendary.

It began its life as a twinkle in my mind’s eye early last summer when my neighbour threw out some pine floorboards and the council started digging up the by-pass.

Hmmm. Now that I write it, that sequence of cause and effect does look rather odd, even to me. I am sure you can see the relevance of floorboards to a set of free-standing bookshelves. The by-pass never actually came into the thing, but it was my Muse. When the workmen ripped out the old armco barriers they piled high stacks of wooden posts which whispered to me “take us home and use us to support the floorboards and make a bookcase”. Shelf. Bookshelf. They were rough and interesting and distressed and chunky bits of wood. They’d have looked fab. Now I am a socially confident woman, but stopping at the building site and asking if I could have the posts from the armco barriers was a complicated conversation I just didn’t feel up to having, so I kept on putting it off. Then one day they were gone and I thought I’d lost my chance.

I was telling a friend of mine about this and she said “oh, my neighbour’s got some flooring blocks she’s giving away” which was how I came by six bin-bags of flooring blocks, 3″ x 3″ x 6″, with pegs and holes to hold them together and bitumen on one side to glue them to the floor. These were blocks that had lived; some were burned, some were splashed with paint, some were heavily scored and had pieces of metal bedded in them, and almost all were covered in coal-dust. Who keeps coal in a room with a parquet floor? The bin bags also contained earth and some small creatures such as woodlice. I piled them in the car, took them home, invested in a couple of scrubbing brushes and a box of Lux flakes and started cleaning them. I’d worked my way through five of the bags when the autumn set in and it got too cold to sit outside covering myself with soapy water and mud splatters. 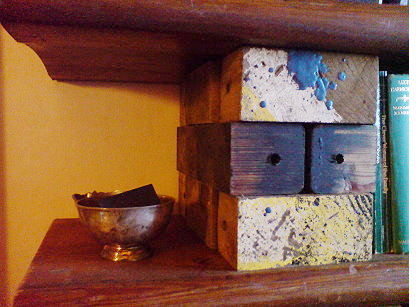 My neighbours took a gentle interest in the proceedings and one of them pointed out that cheap pine tongue and groove floorboards would not hold up to the weight of books. He was right of course. He got me some bits of Southend Pier, but not enough for bookshelves. So once I’d finally cleaned the last of the blocks about six weeks ago and rearranged the living room to clear a space by the wall, I took myself online to look for floorboards. Do you have any idea how hard it is to find floorboards that are 8″ wide and 1″ deep? Don’t bother; it’s damn near impossible. I eventually tracked down a reclaimed timber yard about an hour from where I live. After much scepticism on their part and some delays on mine I went over there a couple of weekends ago. They didn’t have any suitable floorboards, but they did have pew seats. They were about 14″ deep, made of pitch-pine and very, very solid with bull noses, flat on one side and gently curved for pious bottoms on the other. They cut them into 5′ lengths for me, tactfully not telling me they thought I was mad all the while they did it.

And lo! After some considerable time knocking the flooring blocks together with their little pegs and almost as much time cleaning the dirt off the pews and fannying around with a tape measure and a spirit level, we have My Legendary Bookcase. Shelf. Bookshelf. A particularly pleasing part of the whole pleasing exercise is that I had exactly the right number of wooden blocks, which is all the more remarkable because I selected them at random from a pile of the things in the middle of last summer.

I really am pleased with it.

Apologies for the quality of the photographs, I took them as the light was fading yesterday evening, and the camera on the Ericsson 850 is noticably less sharp and crisp than it was when I bought it. I should probably clean the lens.

This entry was posted in diary and tagged Bookshelf, bookshelves, furniture, green, recycling. Bookmark the permalink.

18 responses to “My Legendary Bookcase. Shelf.”