I’m no prude, but Debbie… pastels?

It fascinates me how most of the times that someone starts a sentence with the phrase “I’m no prude, but….” they then go on to demonstrate that yes, indeed, they are a prude. (My two favourite responses in a party-game were “I’m no prude, but unfortunately my sheep is” and “I’m no prude, but I think that’s illegal in Texas” – make of those what you will).

Anyway. I am no prude. Obviously. No-one ever is. However, three things recently worried me.

The first was an advertisement for a lap-dancing and pole-dancing club which I saw on the back of a mini-bus contracted as a school bus. The juxtaposition made me uneasy, though the fact I only saw it once suggests that I was not the only one to raise a disturbed eyebrow.

The second was a joke and party shop which sold “naughty” maids outfits, pink fluffy handcuffs, “naughty” uniforms and other joke bondage gear and next to them there were little-girl fairy wings and children’s Halloween costumes. I found using infantile words like “naughty” disturbing when combined with blurred boundaries between fetish gear for adults and fancy dress for children. 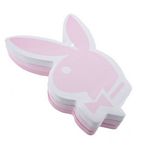 The one that worries me most recently, however, is playboy stationery marketed at little girls. I’m obviously not the only person who finds this disturbing: Brand Republic reported protestors as saying:

WH Smith is claiming that the stationery is being sold as a popular fashion range and that the image is not inappropriate in any way. The group also argues that many youngsters do not know what the image stands for.

I don’t even know where to start with those remarks.

I’m trailing way behind the zeitgeist here, since all of the stories I found are so-o-o-o-o last year darling, but the fact that I came across the stuff about 10 days ago in WH Smith troubles me, as does their spokesperson’s comment, reported in the Guardian last year.

“Playboy is probably one of the most popular ranges we’ve ever sold,” says head of media relations for WH Smith, Louise Evans. “It outsells all the other big brands in stationery … by a staggering amount … We offer customers choice. We’re not here to act as a moral censor.”

What? I mean WHAT? “Not here to act as a moral censor”. Is Ms Evans disengaged and morally unimaginative? Is she naively innocent? Is she just stupid? There is a category error so large you can drive a horse and cart through the middle of it. The issue is not about censorship, it is about what is appropriate. It’s about what has become a very old fashioned word: it is about propriety. In an age where the Internet and mobile phones enable adults to obtain unsupervised access to young children in a way which they have never had before, is it wise to normalise erotica in the presence of children, or to infantalise sexuality in the presence of adults? 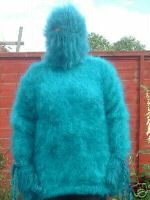 Perhaps it takes a deviant and dirty mind to think these deviant and dirty thoughts. Although we live in a very knowing age, it can still be a surprisingly innocent one. Certainly, I was astonished by the naivete of the conversation about this particular piece of what is obviously fetish-gear. (If the link from that image does not work, then try the knitter’s main page instead). It seems that the darker aspects of human sexuality are being re-wrapped in ways which are cute, fluffy and frequently pink. I am reminded of Anjelica Huston’s line in Addams Family Values:

“You have gone too far. You have married Fester, you have destroyed his spirit, you have taken him from us. All that I could forgive. But Debbie… pastels?”

However, I do find myself asking what sort of society is it which will happily market pornographic brand icons to little girls, and appears to have no qualms about placing strongly sexual imagery and products in the same space as products marketed to young children?

What sort of society makes sex a pink and sparkly thing for little girls to appreciate?

7 responses to “I’m no prude, but Debbie… pastels?”